May is Math Month at SCIDES 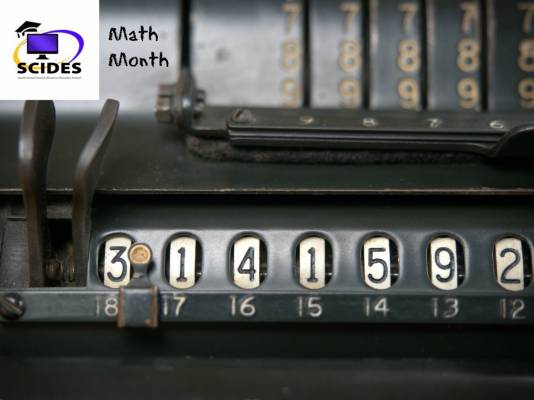 Summer is approaching fast, and before we jump into our yearly celebrations in June, we want to share another exciting topic with you: Math! Yes, math is exciting, and not just for mathematicians. Math is used in many professions, including air traffic controller, architect, astronaut, forensic analyst, nuclear engineer, stockbroker, and urban planner.

But today we’re not talking about the careers that math makes possible (we talked about careers in general in one of our recent blogs), we want to highlight a few other interesting things for you.

Katherine Johnson (born in 1918). She is a retired NASA physicist and mathematician. Katherine calculated trajectories, launch windows, and emergency plans for flights such as Project Mercury and Apollo 11, the flight to the moon. You may have heard her name before, from the recent award-winning movie Hidden Figures.

John Charles Fields (1863 – 1932). He was a Canadian mathematician who was the founder of the Fields Medal for Outstanding Achievement in Mathematics. It is considered the Nobel Peace Prize of math, is only awarded every four years, and only to a person who is under 40 years of age. Since its inception in 1936, it has only been awarded to 51 people worldwide.

IMO (International Mathematics Olympiad). It is one of the most prominent math competitions in the world, and takes place in a different location every year. The first event was held in Romania in 1959. Since then, it has expanded to over 100 countries in 5 continents, with this year's IMO being set to take place in Rio de Janeiro from July 13 to 23rd.

Not quite as big, but a really big deal for SCIDES, is the TRU Math Competition.

This year is SCIDES’ second year attending the competition in Kamloops. Last year, we had several students attend!  Students write a preliminary exam that requires creative thinking and problem solving. From there, the highest scoring students can attend the competition day at TRU. Last year the day included the math competition, puzzles and games section, lunch, scholarships and awards sections, as well as an interesting mathematical talk. This year, there are two students from SCIDES who will be attending and we are looking forward to another fun and interesting day!

"Gifted" – this is a movie about a 7-year-old girl whose mathematical abilities exceed those of graduated adults. It is based on a true story, and you can watch the movie trailer right here.

The Number Devil: A Mathematical Adventure – this book was written for children and young adults by Hans Magnus Enzensberger, in 1997. It explores the vast possibilities and applications of math, by taking the reader on a journey inside a young boy’s dreams. The boy Robert, who hates math, comes to appreciate the fascinating things numbers can do. After reading the book it’s almost impossible not to love math!

Of course, SCIDES also offers a variety of math classes, like Foundations of Math and Pre-Calculus 10/11/12, Apprenticeship and Workplace Math 10/11/12, as well as Calculus 12.

Find them in our secondary program course section. To find out which course is right for you, talk to your Academic Advisor about your customized learning plan. Get in touch with us via our website, or connect on our Facebook page.

Tagged in: e-learning knowledge math theme of the month

We have 2549 guests and no members online