December is Writing Month at SCIDES! 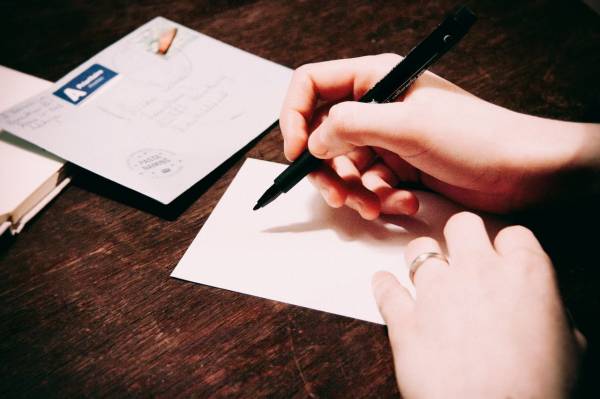 December is Writing Month at SCIDES, and we're celebrating writing in all its forms - especially letter writing by hand. (Yes! That's still a thing!)

The holiday season is a great time to pen a letter or card to your family and friends, and December 7th is Letter Writing Day, so mark the date! There's nothing quite like writing a letter by hand. It adds a personal touch that some of the electronic forms of communication lack. There is no copy & paste in a letter, plus you have to go through the extra work of putting it into an envelope, addressing it, and mailing it out. So whomever gets a letter or card from you? They know that you really care, and that's a very good feeling.

Our challenge to you is to write a letter or a card to someone during the month of December. Whether you're writing on December 7th (Letter Writing Day) or any other day this month, you'll make someone very happy with it. Of course we'd love to hear about it! Snap a selfie when you're mailing the letter, and share it with us on our Facebook page - we'd love to see it!

Here are some reasons to write a letter. Maybe one of them will inspire you:

Writing letters did not originate in Canada, as the First Nations Bands traditionally communicated and educated orally. They told stories, that were passed on from generation to generation. Stories about the Winter Solstice, for example (which also happens to be in December - on the 22nd!). The solstice marks the date that the days get longer and the nights get shorter again. The First Nations celebrated that the sun began to move back towards their home, signalizing that spring would be on the horizon soon.

Letters first became popular in ancient Europe, where they were used as a form of self-education. From there, they evolved as a means of communication, and it remains that way to this day. It's quite fascinating, really, because writing letters is something that has remained the same for centuries (maybe even millennia!). Sure, there might be better pens and fancy paper, but the concept of writing a letter and sending it to someone has remained the same. That's remarkable in a world where things change constantly, right?

One thing that has changed, though, is the way letters are delivered to the recipient.The first real sign of a mail delivery system was in ancient Persia. They paved roads from city to city, so horses and carriages could deliver mail. This system was used until the invention of trains; and then in 1912 in Germany, the first air mail delivery was made, replacing ships for delivering mail between continents.

One thing that hasn't changed, is that letters are a wonderful way to stay in touch with people you care about. There were times in history when a letter was the only way of reaching someone - like during WW II, when soldiers stayed in contact with loved ones through letters. And while we now have email, messaging, and texting, opening the mailbox and finding a letter remains something special.

We hope we've inspired you to pick up a pen and give letter writing a try :) Here are two more resources to check out:

The Writing Toolbox - Tips from the Masters

How to Write Letters - A Vintage Guide From 1876

We hope you have a wonderful holiday season and receive many letters and cards, yourself!

Tagged in: e-learning knowledge theme of the month writing

We have 1914 guests and no members online